ONS survey suggests around 7% of the population have had Coronavirus 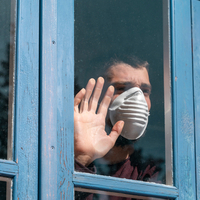 A recent survey conducted by the Office of National Statistics suggests that around 7% of the population has had Coronavirus.
Antibody tests sent out to random households suggest that approximately 7% of the population in England has been infected by Covid-19. The findings are based on a sample of 885 people collected after the 26th April.
As many people seem to be asymptomatic, it has been extremely difficult for scientists to estimate how many people in England have had the virus. Antigen testing can confirm whether or not an individual has the virus at a given time, but it cannot be used to identify people who have already been infected, perhaps even without knowing. The antibody test provides a useful insight into how many people have had the virus and also, how many individuals have antibodies without experiencing any noticeable symptoms of Covid-19.
The ONS antibody survey indicates that around 1 in 15 people have had the virus in England. Prof Lawrence Young, from Warwick Medical School at the University of Warwick, explained that the figures imply that the majority of the population has not been infected. Antibodies are produced by the immune system and they usually appear on blood tests 2-3 weeks after infection. Antibodies help individuals to fight illness, but it is not yet known whether they provide immunity against Covid-19.
The most recent ONS survey also revealed that approximately 133,000 people currently have the virus in England. This was based on a sample of 19,000 individuals living in 9,000 households in England. This equates to roughly 0.24% of the population. Swab tests performed between the 11th and 24th May flagged up 36 positive tests. Comparisons with previous sample studies show that the number of infections is not rising and the ONS stated that the virus is now “relatively stable.”