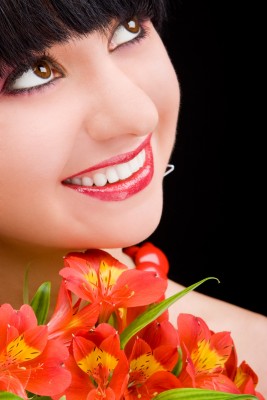 People living in the Middle East have started to become familiar with cosmetic dentistry. As a result, they are spending more money than ever on teeth whitening procedures.

However, dentists are beginning to worry that too many people are buying and using over the counter treatments rather than asking their dentist to carry out the work.

One dentist, Dr Maximilian Riewer who works in Dubai, is particularly concerned. He told reporters that he wouldn’t advise people to use home whitening kits bought from pharmacies.

He added that the trays may not be fitted correctly, which can cause the hydrogen peroxide [whitening] gel to overspill and cause gum damage.

The problem however for many people is the cost of treatment by a dentist. Buying a teeth whitening kit is a relatively cheap alternative which can (if used correctly) give just as good a result as treatments carried out by a dentist.

However, often patients do not use the kits as they are supposed to be used. As a consequence, the enamel can become thin if the treatments are overused.

Dr. Riewer continued to say that this home bleaching with the lowest concentration of hydrogen peroxide is the safest – patients just need to make sure that the kits have custom-made trays that fit perfectly.

Although teeth whitening has become popular, many dentists believe that provided you look after your teeth properly and avoid foods and drinks that stain and eat a proper, healthy diet, the cosmetic procedure is not always necessary.

The appeal, however, is likely to relate to the increased popularity of celebrities and film stars who are often the trend setters for younger people. People know a pleasant smile is a noticeable trait, so yellowing teeth rather than perfect white teeth can be off-putting. But there are alternatives, as is often pointed out by the dental profession.

Dr. Riewer concluded that drinking coffee in excess could lead to erosion of the enamel of the teeth. He also stated that smoking and chewing tobacco can make you four times more likely to develop oral cancer, and then there’s bad breath, bone loss, shrinking gums, mouth sores, hairy tongue, and a decreased sense of taste and smell. Smokers also develop more calculus [hardened dental plaque] than non-smokers.