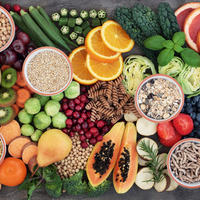 A new year is traditionally a time when people like to think about improving their health. This often means trying a new fad diet or joining a gym, but health experts have come up with an alternative resolution that could make all the difference to your health in 2019. As studies show that 90% of people aren’t eating enough fibre, increasing your intake of this vital dietary material could be the best thing you do this year.

Fibre is found in many foods, but the vast majority of people are missing their daily target on a regular basis. Known for helping to prevent constipation and promote healthy digestion, fibre can also lower your risk of heart disease, type 2 diabetes and some forms of cancer. Fibre can also help you monitor your weight and keep your cholesterol and blood pressure at a stable, healthy level.

Prof John Cummings, a researcher on the study, which was undertaken by the University of Otago in New Zealand and the University of Dundee, described the findings as a “game-changer” and suggested that people should take notice of the recommendations.

Researchers recommend a minimum daily intake of 25g per day, but suggest trying to work towards 30g per day. A banana contains 3g of fibre, while a thick slice of wholegrain bread contains around 2g. Other good sources of fibre include pulses, seeds, wholegrain rice and pasta, baked potato skins, carrots, wholegrain cereals like Weetabix, apples and chard.

In the UK, the average woman consumes 18g of fibre per day and the average man 21g per day. Experts are eager to push the numbers up by encouraging healthy diet options, such as switching ‘white’ cereals, bread, pasta and rice for wholegrain versions and increasing the intake of fruit and vegetables.

To hit the 30g target, nutritionist Elaine Rush, from Auckland University of Technology, has put together a sample fibre-rich menu, which includes half a cup of rolled oats, two Weetabix, a slice of wholegrain bread, a cup of cooked lentils, a potato (with the skin on), half a cup of chard and an apple.