Damaged hearts will soon be able to repair themselves-5859 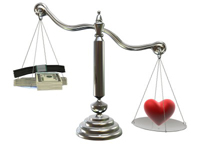 Repairing a broken heart is the subject of many popular songs but is likely to become a reality in as little as five years from now.

Researchers at The Gladstone Institute of Cardiovascular Disease have discovered a revolutionary new way of changing connective muscle tissue into beating heart cells. This will enable a damaged heart to regenerate itself following a heart attack.

Reduce the risk of heart failure

Thousands of people in the UK experience heart failure due to the fact that the heart is unable to repair itself after a heart attack.

Heart muscles cells – known as cardiomyocytes – are destroyed during a heart attack with no way of regenerating them. Plus the surrounding tissue – known as fibroblasts- is unable to replace these dead cells.

But a team of scientists at The Gladstone Institute, led by Professor Deepak Srivastasva have found a way of reprogramming these fibroblasts into beating heart cells or cardiomyocytes.

What is particularly exciting about this development is that it provides evidence to show that non-related adult cells can be reprogrammed from one type of cell to another without having to return to a stem cell state.

The team slowly administers three substances into the blood which activates the conversion of fibroblasts into cardiomyocytes via a stent. This conversion is possible in as little as two weeks.

Results from this study suggest that there are long term implications from this technique which includes the ability to take cells from any of the major organs in the body and reprogramme these to repair damage anywhere in the body.