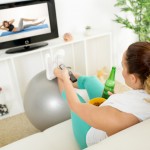 The British Heart Foundation has issued a warning after a report revealed that 20 million people in Britain could be described as “inactive.”

Recent research suggests that inactivity costs the NHS more than £1.2 billion per year. It is a major risk factor for heart disease, and can also increase the risk of type 2 diabetes and some forms of cancer.

According to the study, women are much more likely to be inactive than men; there are approximately 11.8 million inactive women compared to 8.3 million inactive men in the country. Inactive is defined by the authors of the report as failing to hit government guidelines of 150 minutes of moderate exercise per week and strength exercises at least twice a week.

Harriet Mulvaney read the findings with interest after suffering a heart attack at the age of 44. She thought she was active at the time, but actually, when she looks back, she realises she was busy, but very inactive. She rarely exercised and spent 8-10 hours per day sat at a desk or commuting to or from work in the car. After she had a heart attack having experienced no symptoms beforehand, Harriet decided to make changes to her lifestyle and increase her activity levels.

The report suggested that the average man spends the equivalent of 78 days of the year sat down, compared to 74 days for women. Inactivity levels were highest in the North West and lowest in South East England.

The government recommends five 30-minute sessions of moderate exercise, such as brisk walking cycling, playing doubles tennis and roller-skating per week. In addition, strength training, such as yoga, gardening, lifting weights and resistance training, are recommended twice a week. Vigorous activities, of which you can do 75 minutes per week in exchange for 150 minutes of moderate exercise, include circuit training, running, playing team sports, singles tennis, aerobics and dance classes, skipping and swimming.