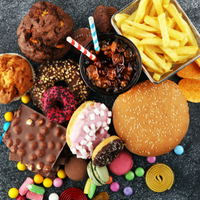 England’s chief medical officer, Prof Dame Sally Davies, is considering a new tax on unhealthy foods in a bid to encourage people to adopt healthier eating habits.
Prof Dame Davies confirmed that she is thinking about recommending a tax on foods that are high in sugar and saturated fats as part of a drive to reduce the prevalence of childhood obesity. The chief medical officer is hoping that the tax could discourage parents from buying high-calorie foods. Prof Dame Davies has been asked to carry out an immediate review to identify measures to increase the chances of achieving targets for lowering obesity rates. The government is currently working towards a goal of reducing childhood obesity by 50% by 2030.
Speaking to BBC News, Prof Dame Davies suggested that she was going to be “bold” but added that she wasn’t “anti-fun.” Recently, the findings of a new study claimed that eating ‘ultra-processed foods’ could increase the risk of premature death significantly and foods mentioned in the study, including chicken nuggets, crisps, sugary breakfast cereals, and ice cream, could feature in the proposed review.
A tax on fizzy and sugary drinks was introduced in April 2018, and Dame Davies suggests that a similar approach to unhealthy foods could steer parents in the direction of buying healthier, more nutritional foods for children. As well as taxing unhealthy foods, there could be measures to make healthier items cheaper, so that parents are actively incentivised to choose products that are better for them and their children. The aim is to encourage healthier eating habits at the same time as making sure that food shopping is as affordable as it is now.
Matt Hancock, health secretary, commissioned the review, which will be published in September. In addition to her own research, Prof Dame Davies will be working with nutrition experts, representatives from the food and drinks industry, scientists and public health specialists.