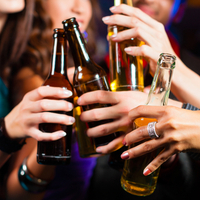 A new study has suggested that consuming just one alcoholic drink per day can elevate the risk of strokes.

A new genetic study, which has been published in The Lancet, claims that even light drinking can increase the risk of strokes. The study, which was undertaken by UK and Chinese researchers, contradicts previous advice that a single drink could be “protective.”

Researchers from the University of Oxford, Peking University and the Chinese Academy of Medical Sciences followed a group of 500,000 Chinese people for a period of 10 years. They found that drinking 1-2 drinks per day, every day increased the risk of strokes by 10-15%, while drinking 4 drinks per day elevated the risk by 35 percent. A single drink was classed as a small glass of wine, a bottle of beer or a 25ml measure of spirits.

It is estimated that 16 in 100 men and 20 in 100 women will have a stroke. This means that in a group of 100 non-drinkers, the number of strokes would increase by 2 if the group was to start drinking 1-2 drinks per day.

Prof David Spiegelhalter, from the University of Cambridge, said that half a bottle of wine per day could increase stroke risk by 38% and claimed that drinking this quantity of alcohol is “very roughly the opposite effect of taking a statin.”

In addition to suggesting that drinking even small amounts could increase the risk of strokes, researchers found no evidence to support claims that alcohol can have protective benefits.

China has been identified as an interesting place to conduct studies on the impact of alcohol, as there’s a great deal of variation linked to drinking habits among the Chinese population. A third of men don’t drink, and very few women drink on a regular basis. Some people choose not to drink because genetic factors make them feel sick and unwell when they do drink. By comparing outcomes and health status between drinkers and non-drinkers, it’s possible for researchers to get a more accurate measure of the direct impact of alcohol on stroke risk. Western populations don’t’ have the same genes, and as such, it wouldn’t be possible to carry out the same study in the UK.

Researchers are keen to point out that the study suggests that drinking alcohol frequently, even if it’s a small quantity, does not offer protective benefits and that drinking on a daily basis can actually increase the risk of strokes. Current guidelines in the UK recommend a maximum intake of 14 units per week, but they also suggest taking frequent alcohol-free days.