Could coconut oil be as harmful as butter and beef fat?-6484 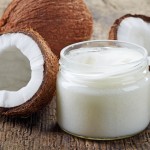 Coconut oil is one of those foods that have appeared from nowhere and taken the culinary world by storm. Thanks to social media, fads catch the attention of millions of people around the world, but could this one actually do more harm than good?

Although coconut oil is often sold as a health food and marketed as a means of cooking food in a healthier manner, scientists in the US suggest that it could be as harmful as using beef fat or butter. Research conducted by the American Heart Foundation claims that coconut oil is laden with saturated fat, which can increase cholesterol levels. The AHA claims that there is little evidence to back up suggestions that using coconut oil is any better for you than frying food in butter or beef fat.

We’re often advised to monitor our intake of fats very carefully, but there’s a lot of confusion relating to good and bad fats. Generally speaking, we consider animal fats to be unhealthy and oils taken from plants to be healthier. However, this may not always be the case.

Studies suggest that levels of saturated fat in coconut oil are very high and this type of fat can increase your risk of high cholesterol. Researchers discovered that 82% of the fat found in coconut oil is saturated, compared to 63% in butter, 50% in beef fat and 39% in pork lard.

In updated guidelines, the AHA suggests replacing saturated fats with unsaturated fats. Swapping animals fats and sources like coconut oil for unsaturated vegetables oils, examples of which include sunflower and olive oil, could have a very positive impact on cholesterol.