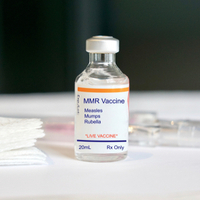 The number of cases of mumps in England has reached a 10-year high.
Health experts are urging people to make sure they have had both doses of the MMR (measles, mumps and rubella) vaccine, as the number of cases among young adults rose to 5,042 in 2019. This represents a four-fold increase from 2018. There are concerns that young adults are particularly vulnerable, due to the fact that they might have missed out on both rounds of the MMR vaccine as youngsters. Health scares and inaccurate news articles led to many parents whose children were born in the 1990s and early 2000s choosing not to vaccinate their children, and now, cases of mumps are becoming more widespread, especially among university populations.
Mumps is a viral infection, which used to be prevalent in the days before the MMR immunisation. The MMR does not prevent all cases of mumps, but it has reduced the number dramatically since the end of the 1980s. The most noticeable symptom is swelling under the ears and in the glands in the neck. As mumps is contagious, it often spreads quickly in schools, colleges and universities.
Although most people do not require intensive treatment for mumps, it can be very painful, and there is also a risk of complications.
In response to rising rates of mumps, Public Health England is encouraging anyone who hasn’t had both doses of the MMR vaccine to visit their GP. The vaccine is available on the NHS for all ages. It is particularly beneficial for students to make sure they are immunised, as outbreaks tend to affect student populations.
The MMR is incredibly effective, but the level of protection against mumps is slightly lower than that of measles and rubella. This means that it is still possible for those who have been immunised to catch mumps. However, the risk is much higher in those who haven’t been vaccinated.